Water is everywhere that you look. It’s in your sink when you turn on a faucet. It makes up the lakes and the oceans. There is so much water that it covers most of the planet. It is home to fish and helps people and animals stay healthy. Water also helps the plants to grow and stay green. These may be things you already know about water, but there are also a lot of things that you probably don’t know.

For example, the water we use is very old. It is even older than the dinosaurs that used to roam the Earth. In fact, some of the water that you drink and take a bath in could be the same water that was around when life first appeared on Earth. Water this old is still around because of what is called the water cycle. The water cycle is when water naturally circulates from the ocean, lake, pond, river, or reservoir, up to the air and then back down to the soil and body of water. The water cycle happens over and over again, all of the time; even though we don’t always see it happening. 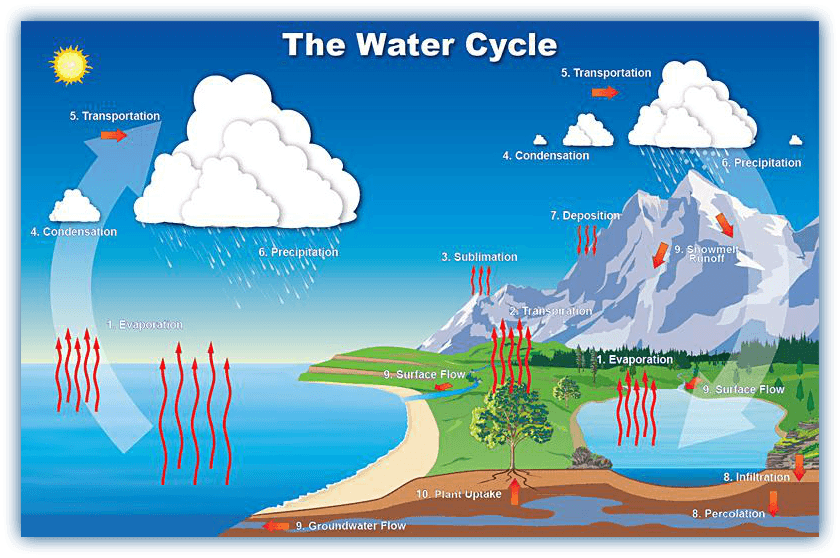 The sun is an important part of the water cycle because of the heat that comes from it. When the sun warms up the earth it also heats up the water that is in rivers, streams, lakes, and oceans. Sunshine heats up the water so much that it turns into water vapor. Water vapor is water in the form of a gas. When water turns into vapor because of heat it is called evaporation. When water evaporates it lifts into the air and cools down. Once it cool down the vapor turns into very small water droplets that form the clouds that we see in the sky.

The droplets that form clouds get heavier and heavier and more crowded until the air cannot hold them any longer. This is what is happening when some clouds appear darker than others. When it becomes too crowded those droplets of water drop from the cloud back toward the ground, where it lands back in the ocean, rivers, or other bodies of water. Water droplets also land on the soil. When this happens it is raining. If the air in the cloud is extremely cold the water will change from a liquid to a solid. When it falls it is snow. Snow settles on the ground and doesn’t always melt right away. When it does melt it turns liquid again and the ground soaks it up. When water is soaked into the soil it is called infiltration.

Mountain ice forms when snow falls on mountain tops; because a mountain top is so high, it is very cold during the winter months. This makes the snow freeze and turn into ice. Snow and ice can even form a glacier. When the seasons change the weather will get warmer on the mountain and the ice and snow will slowly start to melt and make its way down the mountain. This water is called runoff water as it runs into streams and rivers. The water that ends up in a stream or a river will make its way toward the ocean over time. But, if there is heat from the sun and very little water, evaporation will happen before it can make it. This is what happens when a river is completely dry.